Ferol Humphrey's American Tarot
by Marco Benedetti Tarot, Rome Italy, 2020~
April 2021~We are pleased to announce a new producer offering perfect deck-sized boxes,
and our newly refined colors nearly identical to the 1918 DeLaurence Yellow.
As with all Marco's decks, handmade copies are available~ email by clicking his photo.
Visit the new market producer by clicking photos of the cards. 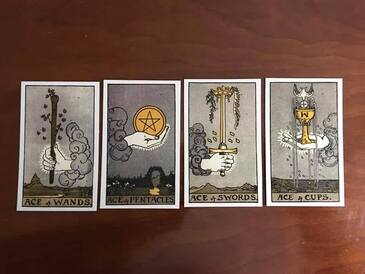 A homage to the first Tarot published in the US in 1916, based on original artwork of Pamela Colman Smith, this Tarot dominated the US market for five decades, and is of historic importance for that reason. It is available in the light yellow which went into print as a deck, and in the aged yellow found in the book publications of the L.W. De Laurence company.


​
Marco Benedetti is a creator of fine replicas of ancient Tarots. He is known for his painstaking restorations and reissues of historically significant European decks from the last 500 years of Tarot history. Never interested in Colman Smith Tarot, his attention was captured by my public enthusiasm for the nearly unobtainable DeLaurence Yellow Tarot, which ceased production in the US by roughly 1935 for the Square Yellow, and 1954 for the Round Yellow. Marco realized the signficance of this never-before-replicated Tarot as an important branching on the tree of Tarot history, and offered to make me a custom deck for my own use. He asked permission to name the replica after me, in homage to both my enthusiasm and the significance of the first American Tarot. For my part, I was honored to be connected with Marco's fine work, and this particular deck, which draws me deeply, and is now in reissue and available to all.  I am delighted with the whole development, because I truly think it is a significant, unusual deck, of value to readers.  For the whole story of how our deck came to exist, in Marco's own words, scroll down the page!

This first-ever replica is offered in both Custom Editions, and commercial editions, in Light and Aged Colors.
Custom: ​
MakePlayingCards, in both colors:
To learn more about Marco Benedetti's Tarot restorations, click his photo. You will be taken to his MPC page. Every beautiful deck you will see there is available in Custom, for those who prefer softer papers, special boxing, and personalized-name boxing.  Of particular note is his Homage Visconti, which is offered in Gold Foil, and that means *real* gold. He is Italian, living in Rome, after all!
HOW DID FEROL HUMPHREY'S AMERICAN TAROT COME TO EXIST?
We think this is a great story. Let's let Marco tell it himself:

Marco Benedetti Tarot
February 6 at 5:20 AM · Dear friends, if only a month ago someone had told me that I'd print a RWS I would have rolled over with laughter: everyone knows I HATE the RWS!

A month ago I didn't even know this clone, published in USA in 1916, together with Waite's book, by an unscrupulous pirate, L. W. de Laurence. Fact is, like it or not, until the reprint of Waite's original in 1960 by University Books, it was THE Tarot deck for the American people: we cannot deny its historical importance. (It's an interesting American story, more on this on
(https://waitesmith.org/index.php/de-laurence-scott-co/)
​
The original deck is extremely rare and reaches exorbitant prices; now, it happens that my friend Ferol Humphrey was desperately looking for it; her public appeal was extremely clear: she didn't want it for collecting, but to use it for her Tarot lessons; in other words, she was looking for a working tool.

Ferol is one of the most enthusiastic promoters of my deck and it seems to me an excellent opportunity to show her my gratitude; above all, for someone like me who likes to restore ancient Tarot, printing a replica where there's nothing to restore is trivial work; the time to lay out the files for printing, then just a little healthy manual work to cut the deck. Searching the net I can easily find the high resolution files of the entire deck on a public domain repository, so, having verified that Ferol actually wanted a working tool, not a precious relic, I tell her I was going to print the replica for her.

I thought to close it in a couple of days, in reality it took 2 weeks longer, because obviously projects tend to grow in your hands, so it happens that I find another series of images, this ones scanned from the accompanying book, with different colors: the yellow is darker, but not orange as in the later version of the deck printed by DL's son; the images are more shaded and have a patina that adds depth at the scenes and which undoubtedly has a certain charm.

DL was a sordid pirate, but I have to admit the he (more likely, the anonymous illustrator hired by him) had a very good taste for colors. My feeling is paper and ink used on the book were of better quality that those used for the playing cards, in any case, the images on the cards look a diluted version of the images on the book, which therefore are arguably closer to the intention of the author. Moreover it is an unpublished version: it's hard to believe, but these colors appeared only on the book; how to resist the temptation to be the first one to print it as a deck?

It took me a little longer also because it was an opportunity to test new materials: my cards are usually printed on uncoated paper; by choice, they have a handmade look and feel that is fine for the 15th century Rosenwald or the 17th Rolichon, but this time it was a matter of replicating a 20th century deck. I am extremely happy with the paper I initially selected for printing, a terrific addition to my selection of printing paper: it's double coated, 250gpm (12pt), extremely similar to an industrial playing card; for the record the thickness of the deck is exactly the same as the RWS produced by US Games; but ironically, as I finished printing on coated paper, I realized that the original of 1916 was printed on ordinary cardboard and not on playing card coated stock paper, which will be introduced only in 1943 by DL's son, so I wanted to print on uncoated paper, too, to get a look & feel closer to the original (obviously, not having worked with the original deck in my hands, I cannot speak of a facsimile, but rather of a tribute, reasonably similar to the original); so I ended up printing 4 decks.

On my side, the creative part was limited to the choice of the pompous name - The American Tarot - and the box cover that makes fun of the 40s' one (the 1916 deck came in a plain white box), replacing DL's name with that of Ferol as author and mine as publisher, punishing the pirate with damnatio memoriae.

With Ferol's kind approval, I left her name on the box also for the for sale version, because after all, she was the one who revived interest in this deck and wanted it strongly, this is HER deck.

Both versions are available at [Make Playing Cards]:
I recommend the factory version, as the aspect ratio of [MPC]/RWS standard is the right one for this deck.
Anyway, if you really want to pay double the price on [MPC] for the hand made version of an industrial deck, it can be done. The hand made cards are slightly bigger than the [MPC] one (as the original deck); you may have your deck printed on playing card stock paper or uncoated cardboard, like Ferol's personal decks.

Moreover you have the option, if so you desire, to have your name printed on the box in place of Ferol's one. (She promised not to blame you for this.)