MY KABBALAH LIBRARY
Here you will find books I own, have read or am actively reading, which inform my understanding and meditative practice of Kabbalah, Jewish inner tradition. I am a non-Jewish person learning about a huge, beautiful, revelatory, and complex topic. I hope to gain whatever wisdom and comprehension I can, from this absorbing and valuable body of material.

I have an extensive library, so I will add titles in the order in which I have read them, and take photos of my own actual books. I will also share internet sources which I have found valuable. I will try to add one book or resource per day, until I have them all on site. This should answer any questions about my style of study, and general orientation to learning about the topic.

I am not teaching Judaism, nor do I have an opinion on what Judaism is, because I am outside the tradition and the people, and cannot have a valid opinion. I do not teach Christian cabala, nor hermetic qabbalah. I have read and studied only Jewish authors, scholars, and historians, because they are the origin and authority, in my opinion.

The books you see here inform my personal understanding. I syncretize and simplify many foundational and basic views, evaluations, and interpretations from the advanced writings of brilliant scholars, historians, and thinkers of today and history. For instance, I take note when two highly honored scholars disagree with each other, and attempt to learn and understand why.

Please note, these books are NOT how I teach Beginner Kabbalah or Beginner Tarot & Kabbalah, my classes for the unaffiliated gateway student. I pack all that I know into those classes, to inform their journey responsibly, and help them in life, no matter what their traditions. My beginner classes are for beginners and are intended to encourage further study. If students are drawn to learn about Judaism, there are other avenues for that pursuit.  I simply prefer to learn from the originators of Kabbalah, rather than those who came later. So here are my books. 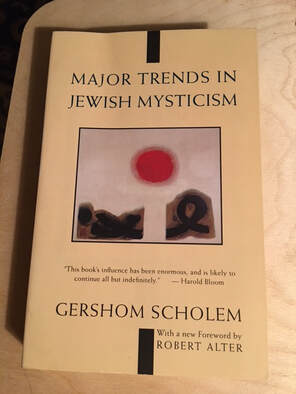 This is where it all started for me, in terms of study and exposure to theory and history. I read this on the recommendation of a famous Tarotist, and the whole topic came alive for me in a way perfect for my understandings. I always learn top-down, starting with huge overviews and then going deeper, rereading and reconceiving, adjusting my thought as I go. 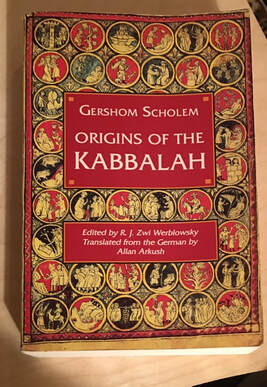 Origins of the Kabbalah
Gershom Scholem

After the Major Trends' liberating overview of centuries of kabbalistic thought in its waves of evolution, I was ready for more. Here we have discussion of the background environment of the emergence of a written history, with Book Bahir, and geographic locations of early solid development. This book led me to buy the Book Bahir. After reading this, I was a committed fan of Gershom Scholem, and had decided to read everything he ever published. 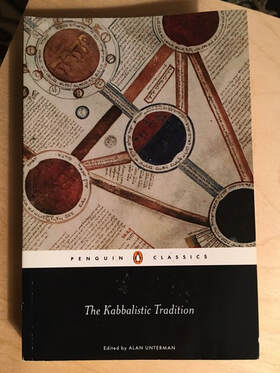 Here we have a fantastic overview of all kinds of topics within the study of kabbalah. You will find excerpts highlighting history and meaning of terms frequently used, from a group of famous and influential kabbalah students and masters in history, beginning with Chaim Vital, student of Isaac Luria. It's a great overview of key ideas from specific teachers, both for starting, and for review of the breadth of the topic. 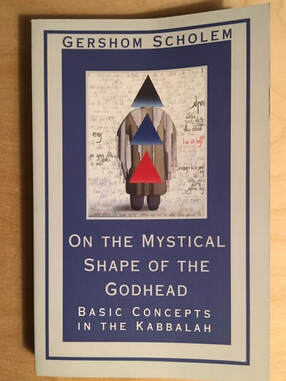 I was on a mission by now, to find and purchase the pertinent Scholem books in case they got away! I expected that I would find some of his titles were for later in my studies, but I grabbed this one because the chapter headings were so interesting to me. I saw a treatment of evil, and one on reincarnation, and wanted to see how Judaism viewed these things, historically, in connection with kabbalah. I continued to find pleasure in the immense readability of Gershom Scholem's writings, which I would later discover was not the case with other great scholars of kabbalah, such as Elliot R. Wolfson. I was in the brand newness of things.

I did not know who Joseph Dan was at that point, so did not recognize the significance of his having written the foreword.  That is part of the fun of such a journey of review from the beginning to the current moment.  I later bought Joseph Dan's four books on Jewish Mysticism and was delighted to get my hands on them at any price. But, more on that later! 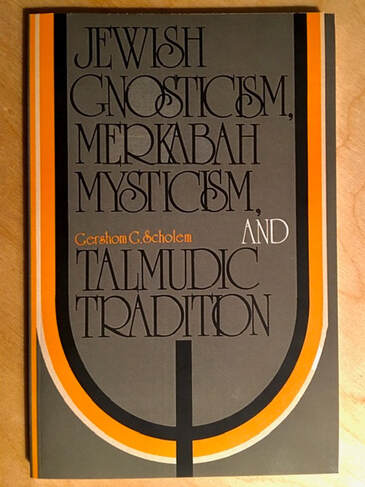 Published by the Jewish Theological Seminary of America, and dedicated from Hebrew University, this slim volume contains articles on Hekhalot mysticism, Metatron and Akatriel, a mention of the Age of Shier Komah in Origen, and the difference between Gnostic and Jewish sources. It is deep water. Each article is short and to the point. I found it helpful because it underscores the thoroughness of earlier thinkers in moving toward things that were later deemed inappropriate. Finding the living thread which enables these contacts and connections in direct gnosis would have been thrilling, and they were diligent.  I found the book helpful because it made it so clear that even deeply experienced people of prayer can founder when exploring the edges. It is inspiring and also a cautionary tale. There are not many who can study this material with their actual practice, even in community and supervision.

Once again, I find myself delighted to review the books I bought and read in the early stages. People always tell me I can't read these things. Then of course I follow my inner promptings. There is a difference between spiritual greed and the quiet suggestions of spirit.
Purchased in 2016
Added to page Sept 24, 2022 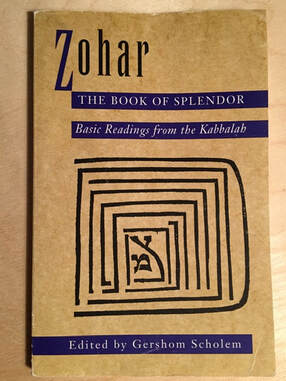 Zohar, The Book of Splendor
Basic Readings from the Kabbalah
Gershom Scholem, Editor 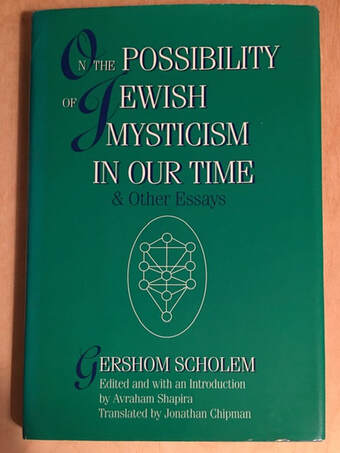 On the Possibility of Jewish Mysticism in Our Time,
​and Other Essays
Gershom Scholem

When I saw this, I jumped. By now, I was buying any Scholem title which popped up in my searches. I wanted to make sure I had them all, for that quiet time in the future when I would be reading and studying to my heart's content, on the topic of kabbalah. By now, I could no longer discuss kabbalah with my Tarot friends, who all studied the hermetic version which I reject, nor my Jewish friends, who did not know anything about it and were a little unsure how to accept my study of a Jewish depth experience. So there was nothing left for me but to collect, read, ponder, formulate.

This title approaches the personal views of Gershom Scholem on Jewish Mysticism, and then looks at the nature of Jewish people and their experience, and examines history, the questions related to What Is a Jew, and What is Judaism, Zionism, language, modern studies, messianism, and whether or not G*d dwells in the heart of an atheist. As far as I am concerned, his views matter, on all of this. Society has changed, the world has changed, and his own students may currently diverge from his foundations, but Gershom Scholem was a forerunner, and should be read fully.
Purchased in 2016 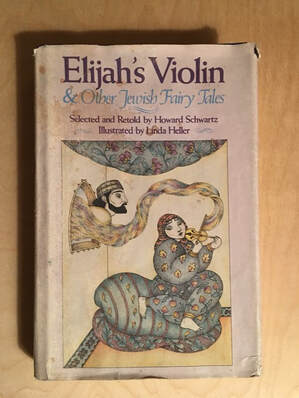 Alerted to this title by a friend of mine who taught storytelling at the Jewish Theological Seminary in NYC, I snapped it up. He read me a tale from this book, and I recall intuitively interjecting, "I am the scorpion!" whereupon he laughed and continued to tell me the rest of the tale.

I had already collected Louis Ginzberg's set, Legends of the Jews, all but Volume V index, and I had Howard Schwartz' Tree of Souls, and a book about all the angels of Judaism from every tradition.  So this was a lovely addition to my potentials, and one day I hope to have a group of students in house, to read and discuss these tales within and outside their own traditions. 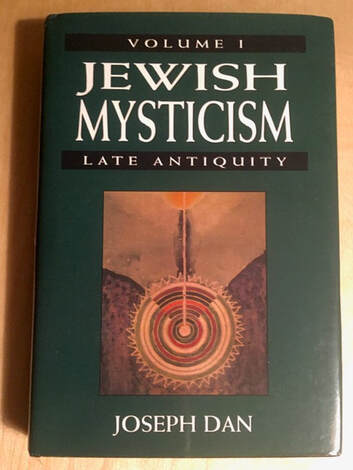 ​I was very excited to discover this scholar, whose writing is very accessible and direct. This is a four volume set, which I acquired painstakingly and with the help of a friend. The volumes were close to one hundred usd new, but I was able to obtain at least one in brand new condition for much less. Another was a gift, and onward until I succeeded.  I am about two thirds through it, and it is fascinating background information which I am very glad to have.

Hekhalot, Merkavah! By now I knew that I had no business in hekhalot or merkavah until I had a much stronger understanding of basic history of kabbalah, terminology, concepts of the oral Torah, and other foundational contexts, so that I would have some general comprehension of context of experience before delving into specific mystical practices.  Prudence! I had a certain instinctive and native attraction to these topics, but there is plenty of time to reach them, and more importantly, at the right time. My initial attraction was the same as my early experiences of personal mysticism. What the heck is happening to me when I pray? How to explain these extraordinary experiences which other people seem not to be having, but I am?

So I stayed concerned with phases of Sefir Yetzirah, and historicity, detached a bit, and let Joseph Dan talk in his own way about these rarefied practices among the deep students of kabbalah, long ago.

This is the type of book you read more than once. Firstly, for the overview, later for recognition, and later, for information, and again, for perspective.
Received as a gift, 2019 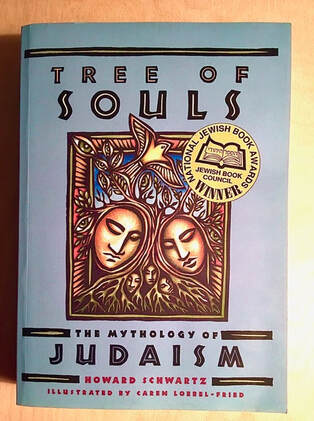 Tree of Souls: The Mythology of Judaism
Howard Schwartz

This is one of the world's beloved books. Once you pop it open, you will easily see why.
Divided into Ten Books, with over 500 pages of text and 100 pages of index, notes, and bibliography, it collects and tells: I can only recommend this one. Most of us have heard some of these and they are highly colored and informative about the story of Judaism. That is all central to the study of kabbalah, where tales and scripture are part of the whole. 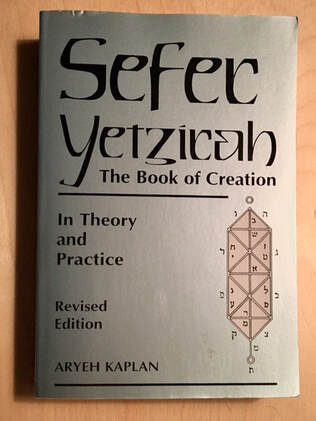 Sefer Yetzirah, The Book of Creation, In Theory and Practice
Aryeh Kaplan

This is a deep work, a primary resource, and not a book to wade into looking for proofs. If you come in here looking for answers, you will find them, and they will contradict each other in many cases, and open more queries, perhaps, than they resolve. I bought this because I had heard it was the first book on Kabbalah. I came looking for information on how to understand the great dynamics. I found diagrams, which gave me permission to be in an exploratory state with respect to Tree of Life shapes as they evolved over centuries. I went through the index looking for Keter, Chokmah, Binah, Chesed, Gevurah, Tifaret, Netzach, Hod, Yesod, and Malkuth, and Daath. I found them. Beyond that, I found conundrums. 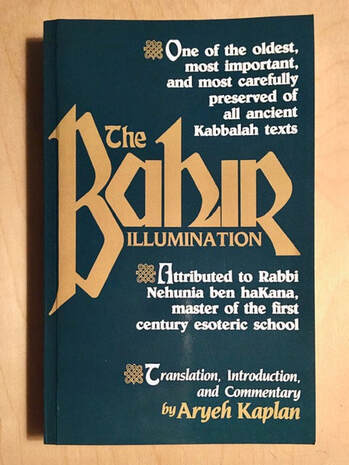 From Sefer Yetzirah I ran immediately to this. After my discoveries there, I had no expectation of clarity from this one, but I did need to know what was in it in a general sense. I was delighted. My copy is filled with highlighter, from beginning to end. Initially, I found the Bahir more satisfying and more direct, once more with diagrams and discourse on the letters.

​
Feb 2023~ This page is ongoing, for library updates. I let things slow down during the winter, but I have at least another twenty books to show you, and I look forward to doing so, as they are all excellent resources which have deeply enriched my life. Onward! FH